Laser Vibrometers are an excellent tool for a variety of aerospace applications. The examples below show OMS products being used to study the resonant modes of a turbine blade, and to identify subsurface disbonds and delaminations in an aircraft component. 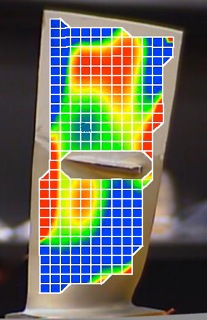 A Scanning Laser Vibrometer
measurement shows the velocity
profile of a vibrating turbine blade.
The measurement grid has been
tailored to match the specific shape
of the blade. 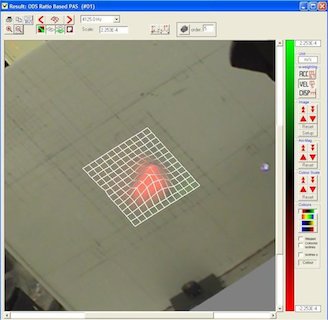 The presence of a subsurface disbond or delamination
can be observed from a velocity scan of the surface
with a laser vibrometer.

OMS Laser Vibrometers can be used to quantify the vibration of a door panel of a vehicle.

A measurement grid has been tailored to match the shape of the vehicle doors. At each point, the
velocity vs. time and the velocity vs. frequency measured by the laser vibrometer can be displayed.

A measurement grid has been created for a hard disk system. The figure on the right
shows a frame from an animation of the hard disk vibration, taken with the ScanSet system.

OMS vibrometers can be used to study the linearity and frequency response or audio speakers, or to quantify the vibrations from musical instruments. 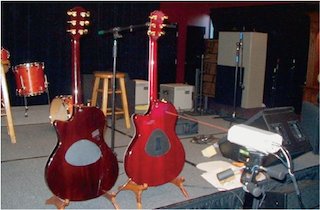 A single point laser vibrometer is used to compare the
vibration of two similar guitars. 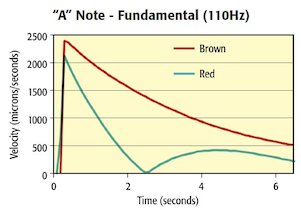 The graph shows the measured vibration from the laser
vibrometer when a single note is plucked on each guitar.
The brown guitar shows a much smoother decrease
in amplitude.

OMS Laser Vibrometers have been successfully used in many medical applications, including studying eardrum vibration, muscle response, and the motion of simulated spinal columns. 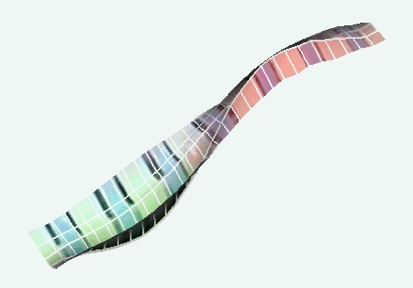 The figure shows a frame from the animation of a vibrating
spinal column.

OMS Laser Vibrometers have been used to detect the location of buried landmines, based on the difference between the vibration of the ground above the mine to the surrounding area. 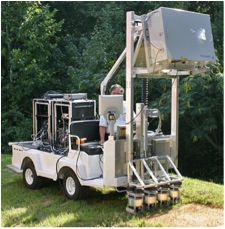 A Multi-Beam laser vibrometer (MB-LDV)
has been mounted on a golf cart to
measure the vibration of the ground in
front of it.

Results from a laser vibrometer array moving across a test mine lane. The presence
of a buried landmine can be clearly seen across several channels.

The presence of damage in a concrete column has been identified using OMS vibrometers. 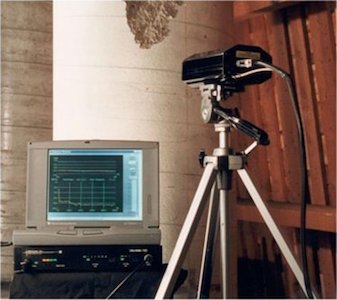 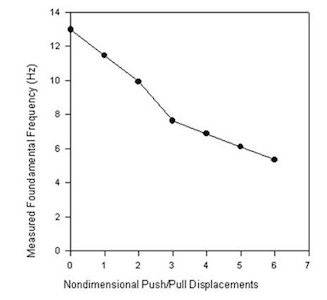 The peak vibration frequency of the column changes as the
column undergoes damage.